One of the persons who played a big role in my understanding of India was Vasudevan Namboodiripad, better known in Kerala Kalamandalam as “Superint”, short for superintendent. He was a very knowledgeable and also a very kind person, who patiently elucidated many details of Indian art and aesthetics. We would sometimes sit on the porch of his house and if he had any doubt about a complicated issue he would ask a group of elderly men who were sitting on the other side of the porch. They would deliberate for some time between them and then revert to us with the appropriate solution. The Namboodiripads are the most exalted brahmins of Kerala. They are a noisy lot, they feel so superior that they are totally shameless. They used to walk around in their villages shouting loudly “I am a Namboodiripad, I am coming” which was a warning for outcasts to hide themselves in the bushes. For if a Namboodiripad would see an outcast, or worse, if the shadow of an outcast would fall on a Namboodiripad, the latter would have to go through extensive ablutions to purify himself.

The Namboodiripads are of course vegetarians, but Vasudevan had participated in the interdining movement. This was a project initiated by Gandhi, who propagated the abolition of the cast system, and implied that people from different casts would sit at a common table and eat each other’s food. Vasudevan had such an open mind that he enjoyed the experience and when he came to Holland he also ate whatever people were eating, without any reservation whatsoever. I know a lot of brahmins who have a modernist attitude and will eat fish, eggs and even chicken, but to eat rare beef is another matter…Mrs. Namboodiripad was a different story. At one time a guest of Vasudevan expressed the desire to have an omelet and Vasudevan said that would be possible but only if the person in question would prepare it in the kitchen, as his spouse wouldn’t touch eggs. OK, it was done in that way, but the consequences were rather rigorous: everything in the kitchen was thrown away, the kitchen itself was ritually cleansed and all utensils had to bought anew. Well, probably Mrs. Namboodiripad wanted new crockery anyway.

Why am I blabbering on about the Vasudevan family? Well, apart from the reasons mentioned above I have also been inspired by an article by Vasudevan entitled “points for a note”. I have always been charmed by this title, and created “thoughts for ideas” as a pendant. 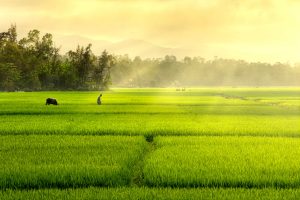